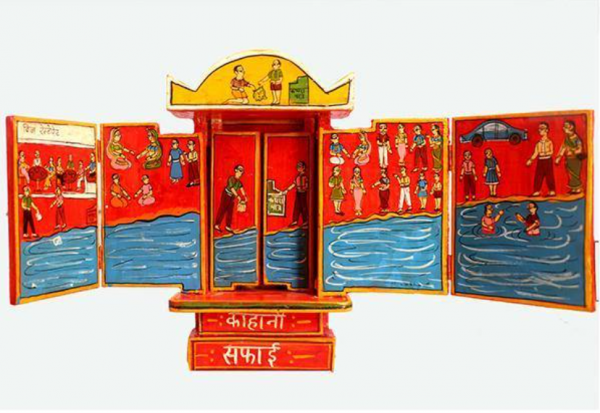 Under the Textiel Factorij, I have developed a series of lectures and workshops for art academies in The Netherlands on Indian visual storytelling art; starting with illustration students at ArtEZ University of Arts Arnhem and interactive performance design at the Hogeschool voor de Kunsten Utrecht (HKU).

As an artistic researcher and social designer, I am interested in how art and design can be leveraged for social change and empowerment. While researching various Indian visual storytelling arts for a series of lectures and workshops, I came across Pata Chitra art and Kavad making. While these traditional art forms were highly intricate and interesting, I grew more fascinated by the artisans and their skill sets. This was primarily for the reasons how some artisans were using their platform to make a difference. While traditionally, the artforms were intended to be used to disseminate religious stories, and ideas, some artisans like Swarna Chitrakar and Dwarka Prasad use their art to make stories to bring awareness to their communities. This highly inspired me to dig deeper into their lives and story worlds and what drives them to think out of the box.

My intrigue led me to understand more about the art of Pata Chitra. For the most authentic views on how her art became her voice, I interviewed Swarnaji to learn about her motivations and desire for social change. And what is it that exactly drives her. Swarna Chitrakar, a traditional Patua painter, hails from a small village in West Bengal, India. Swarnaji belongs to a family of Patuas who practice a unique folk art of painting and storytelling through songs. Swarnaji has been practicing the art since she was a child as it was passed on to her from her family. Her unique skill was recognized by the state and she won a state-level award in 1994 for her art.

Swarna has portrayed and performed a number of social themes, such as 9/11, tsunami, about endangered species, nature preservation, the power of motherhood and being a woman. Recently, she also portrayed the pandemic to cover the poignancy of the subject.  She also writes her own songs. Her favourite song is about women’s emancipation, their challenges and strength. 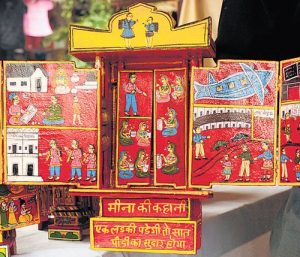 On a related note, I interviewed Dwarkaji in the context of Kavad art, one of India’s rich storytelling traditions crafted on a wooden box. Kavad art combines the skills of carpentry, painting and storytelling, making it a truly unique artform. Dwarkaji has been practising the Kavad art for more than 46 years, since his childhood. Traditionally this artform is divided in two professions- the carpteners and the storytellers. The ‘carpenters’ make the kavads, a wooden box that is then painted with rich stories on different subjects. Following that, the ‘storytellers’ wander from door-to-door to tell stories of religious significance. Unfortunately, as any traditional art,  the function of the storytellers is diminishing, as their work has been replaced by TV. Dwarkaji however continues his art and sells Kavads as decorative objects, that art afficionados can display in their homes. He uses his platform to bring awareness in the villages of Rajasthan on girls’ education. He grasped the journey of a young girl Meena on his kavad creation, who at first was prevented from going to school, but went on to excel in her education and made her family proud. This is a true example of art for social change. 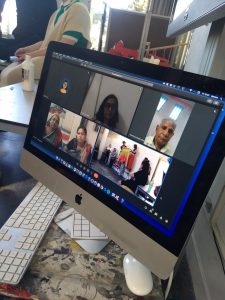 Through the bridging efforts of Textiel Factorij, we brought this world of Indian traditional painting to the Netherlands. The Dutch art students were really inspired by their artwork and on their turn created a Pata Chit

ra and Kavad respectively, addressing Dutch social issues. The students were especially enthusiastic and appreciated the live connection with Indian artisans and the opportunity to learn and exchange skills and aesthetics. The response was very positive from both ends as it opened world views on both the sides. Students appreciated the direct connection with the Indian craftspeople, where the artisans got a platform to explain and share their century old art forms themselves and students having the possibility to ask questions.  Artisans were directly recognized and credited for their art, and the response also reaffirms their efforts in keeping the traditional forms alive.

Images from top to bottom: