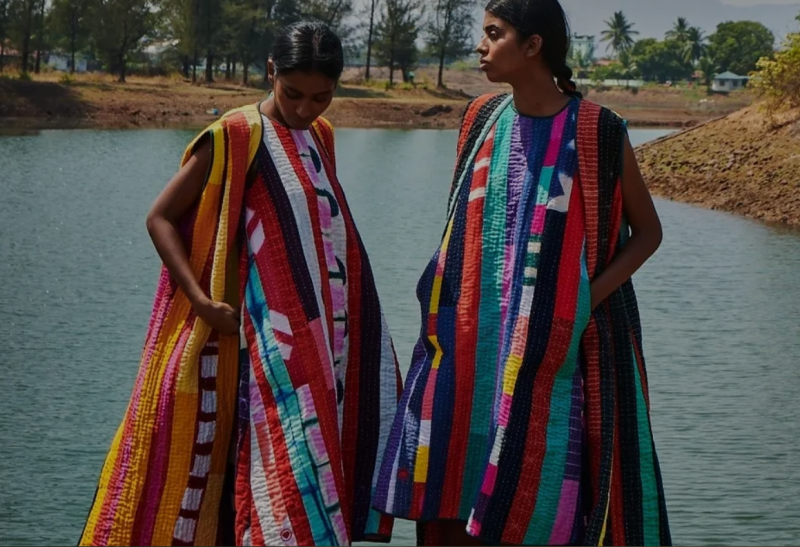 The Art of Upcycling

We are constantly surrounded by waste, all around us, it may not be obviously visible, but it is being created with every action of ours. With almost 200 billion tonnes of trash created each year we need to realise that we cannot continue at this rate for much longer. People, more than ever, must band together to develop solutions to decrease waste not only from landfills, but also from future production.

Jugaad, or vernacular ways for finding alternate applications, has a long history in India. In every corner, every household, Indians have been using jugaad to solve their everyday problems within limited resources using creative methods. With a population this large living amongst finite resources, most Indians grow up with an ingrained sense of respect for these resources and an eerie ability to make the most of out every single object. From an old-tshirt that becomes the cleaning cloth to plastic bottles taking the shape of plant potters, every Indian household has a bevy of these make-shift reused objects in function. They not only fulfil their purpose, but also act as a second life for something that would have become kachra or waste.  Most adults have seen the ingenious social practice, where used sarees would be bartered for new bartan, mostly steel pots and pans, a practice that kept the textiles from going away to waste and empowered women in return. Outlined and over-emphasized by age-old practices like these, it is this lifestyle that needs to be endorsed on a much larger scale. Mindless consumption is something we simply cannot afford, a thought that most kids in countries like India grow up with needs to become a way of thinking.

These deep-rooted everyday upcycling practices are being applauded all over the world today. It has been a mindset, an ingrained habit that Indians rarely let go of. What’s more, on multiple occasions these practices have grown into intricate, original crafts based on the inherent value of making the most of the resources available. Here we would like to highlight two century old Indian upcycling craft traditions and one contemporary one. 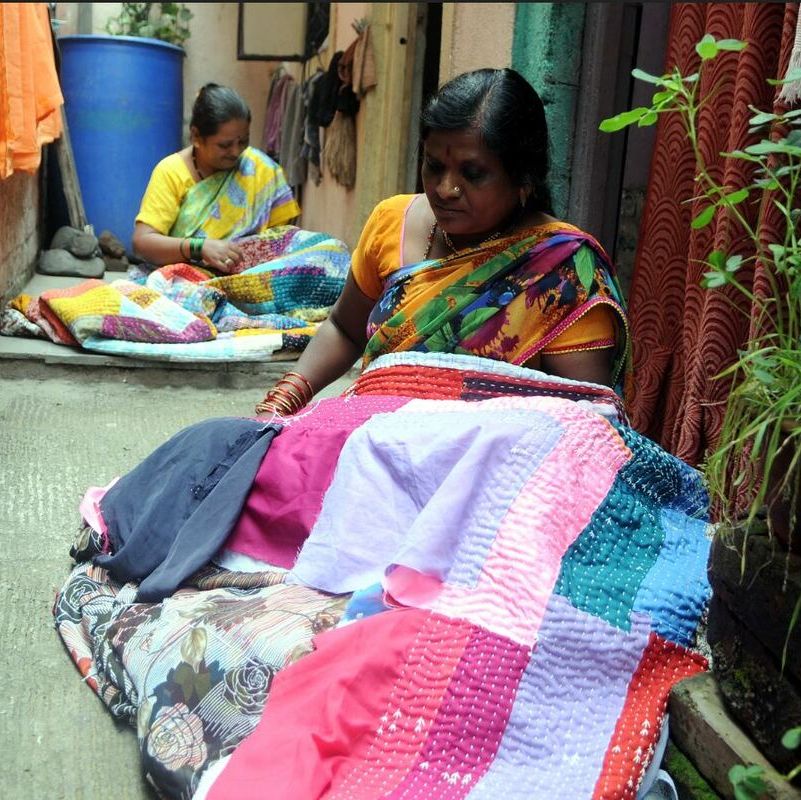 Kantha began in West Bengal and Odisha as a practice of reusing and recycling dhotis, sarees, and other clothing items that Bengalis were unwilling to throw away. This traditional craft has become more relevant than ever. Today, the fashion industry is producing 13 million tons of waste every year, 95% of which is said to be reusable. Due to this cycle of excess production and waste contribution, the recycling of well-used cloth-turned-rags was a logical stage in the life cycle of textiles all over the world.

While there is no certain etymological basis for the term kantha, it is said to be derived from the Sanskrit word kontha, which means rags. It is one of the most ancient traditions of embroidery in India, dating to pre-Vedic times.

Layers upon layers of waste fabric were sewn together known as ‘Godhadi’. Because it is a home-based enterprise, it has traditionally been the women of the village who prepare, cut, and sew the rags, giving old textiles new life. It has been a reality since long, age-old upcycling practices have been carried forward by determined women hoping to save and utilize as much of the waste as they can. In their well-meaning practices is the secret of a life we all aspire to have today, the one we call conscious living.

“Rag Doll” refers to a doll created from leftover cloth and other materials. These are one of the oldest children’s toys still in use today. The rag-dolls were made from used fabrics, reflecting the traditional wisdom of the communities to recycle and reuse materials. While the artisans rely on the same tradition for stuffing the doll, contemporary fabrics are now used to dress up the dolls and tailoring waste is used as the filling material.

The oldest dolls found date back to around 5,000 B.C. at the ancient Indus River Valley civilization site. These ancient dolls were quite precise in depicting the human form. As civilization grew, Indian doll making became more proficient and elaborate. It may be because of the sustainability of cloth as a material and the ease with which it moulds itself as the maker desires. When a bride is leaving for the groom’s house in their culture, they are gifted with a doll to accompany them. When children are born, they are gifted with these dolls too.

Dolls differ regionally. Each state has a number of costume dolls which stand for their originality and distinctive features, which are precisely, aesthetically and authentically combined. The gowns and their jewels include fine detailing. Each doll seems to represent a small bit of local indigenous people. Group compositions are popular as well as a batch of dancing ladies, tribal dancing, traditional Indian dances, animal and bird jungle sceneries, epics from king to queen. 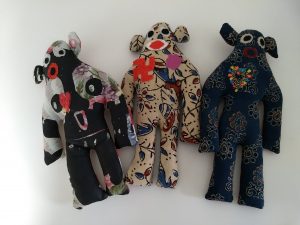 Dolls are still fun to have around your house. Bas Kosters, one of the designers TF has collaborated with, is also known for designing dolls. He got some sample dolls made by Indian craftswomen, but it didn’t really have the look of an original Bas Kosters?

Fashion’s methods have always been accused of harming the environment, whether it’s tonnes of textile trash dumped in landfills or waste created due to rapidly shifting trends. Globally, the sustainable fashion movement has grown post covid. 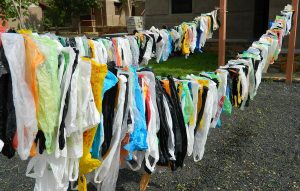 Worldwide, single plastic polythene bags, extensively used by the general population, are threatened as solid waste pollutants. In Kutch district, a similar problem exists, with used plastic bags in urban and rural areas, especially Bhuj, widely found throughout. Around 60 metric tonnes are generated by the city. 30% of this is recyclable (plastic, paper, cardboard and glass). Besides being an eyesore and nuisance, some of the waste’s pollution impacts are increasingly gaining the attention of environmental managers and civic authorities.

The upcycling of plastic trash into fashion and lifestyle goods included firms including Assam villages, weavers, companies like Thela.co, reCharkha, and Khamir. The procedure of collection, sorting, winding and weaving involves a standard plastic weaving technique.

We talk so much about recycling and upgrading in order to mend our environmental and ecological activities by means of unthinking consumption. However, upcycling has traditionally occurred in numerous civilizations, including Japan and India. With McKinsey’s increasing waste estimated to be between $160 billion to $185 billion in surplus stock from the Spring2020 collections, upcycling is the new trend in the globe.

Now Kantha, spearheaded by Indian designers, is entering the mainstream. One such Indian label is KaSha, who is inspired by the indigenous ideology of reusing, repurposing and reclaiming. They are dedicated to up-cycle, recycle and mend clothing and textiles of all shapes and sizes to give them new meaning, drawing from craft techniques. With their “Old New” collection of autumn/winter 2015 Abraham & Thakore, one of the most recognised textile-based fashion label brands in India, brought Kantha to the catwalk In the spring of this year, MatchesFashion, a London-based luxury e-tailer, teamed with the young, UK independent label Ssōne (predicted sewn), to produce a capsule collection, Re-Ssône. Walid al Damirji, a Swiss-born British-Iraqi designer who has integrated the concepts of kantha into his work in his studio in London. He points out that kantha is simply the latest example of Eastern traditions influencing lifestyles in the West.

India has long been a nation of innovative and sustainable methods. It is exemplified by craftsmen, craft communities and the women of our society. With every mindful activity we are taking one step towards a cleaner world. It is now time we start sprinting towards that future. The current condition of our environment demands increasingly effective actions being taken on an unprecedented scale. A change in all our lifestyles, a realisation of our activities and its power is imminent. Without it we only have so much time.

Image sources from top to bottom