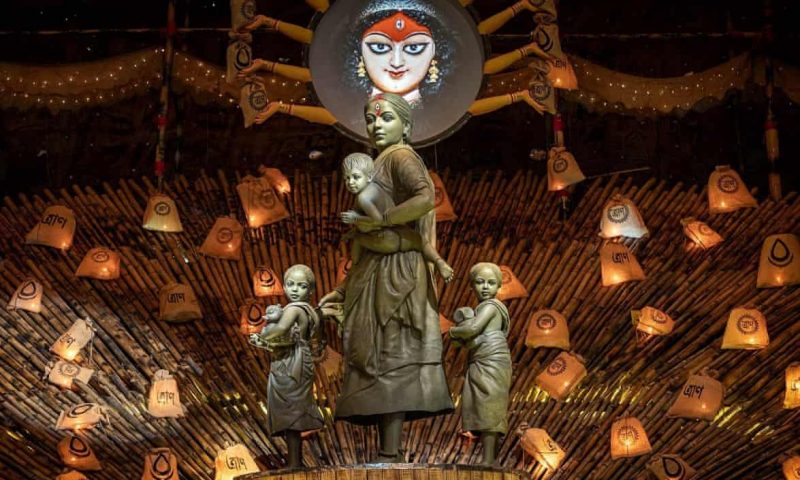 Every year widely and one of the popular festivals of India is Durga Puja. It is traditionally celebrated in the Indian states of West Bengal, Tripura, Assam and Odisha to offer devotional homage to the Hindu goddess “Durga”. A ten day spiritual festival is performed through worship of gods at homes and in the public, the latter features  a temporary stage and structural decorations made by craftsmen, known as pandals.

While the world battled for the coronavirus pandemic and announced a sudden nationwide lockdown to stop the spread of the virus, people also saw the plight of the millions of migrant workers. They had to walk days and nights barefoot under the scorching sun without any food and water to return to their hometowns and to be with their families with hardly any savings nor transport with an uncertain future ahead. Moreover, the industries and shops also got shut and many of them lost their jobs. These workers did not fear for the virus but they feared succumbing to hunger and poverty away from their loved ones.

This year despite the Covid-19 pandemic acting as a dampener for Durga puja festivities, idol makers and puja organisers across the states have kept up with the tradition of bringing unique variants of idols for celebrations this year. To pay a tribute to all these migrant workers, many committees and artisans in Kolkata have decided to erect and worship a statue of a migrant mother this year, instead of Goddess Durga. The pandal aimed to highlight the struggle of workers, migrant crisis issue and the financial distress in their themes.

Pandals are known for their creativity, and this year, as the festival began under the restrictions. The idol makers in Kolkata’s Kumartuli, the iconic potters’ colony nestled in the northern part of the city has more than 500 artisans involved in the idol-making business. However, this year has been a financial disaster for them. Last year they received orders for over 4,500 idols and this year they got less than half, for one-third of the price they get every year for idols, according to the Kumartuli Mritshilpi Association.

It has been particularly tough for the  artisans who earn a living by making the icons for Durga Puja out of clay and fibreglass. Usually they receive orders and begin creating the sculptures five months before the festival, but this year they had less than two months. Even then, orders only trickled in. Most of the artisans left Kolkata and were scared to come back because of Covid-19. But they had to persuade them to return.

The idol makers have tried to capture scenes that frequently appeared in the news, such as  migrant labourers with little children walking on highways – as the main decorative panels in the pandals. They also showed  the dependency of people on medicines, the importance of wearing masks, people paying tribute to those on the frontline against Covid-19. The idol comes even as India-China continues to hold talks to resolve the border dispute between the two nations. Several pictures of these idols were shared on social media.