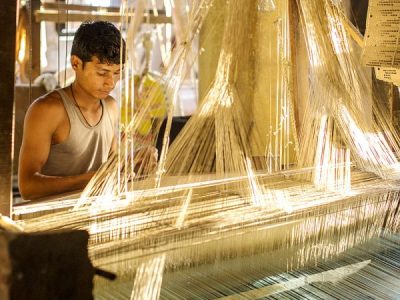 Textiel Factorij has set up a collaboration with textile artist Paul Beumer. Together we will explore the Indian brocade weaving technique and develop new woven artworks through a collaboration with Dutch and Indian artists, entrepreneurs, craft experts and (artistic) researchers. 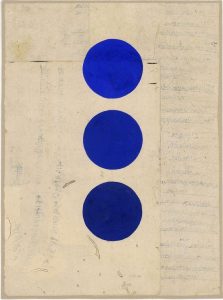 Artist Paul Beumer, inspired by Indian Tantric art from the 17th century, sets out with the idea to apply these geometric, vividly hued shapes into brocades. The Tantric paintings resonate with twentieth-century art – from the Bauhaus and Russian Constructivism to Minimalism – as well as with much
contemporary art today.

In this project Dutch artist Paul Beumer, researcher/curator Lipika Bansal, Indian entrepreneur Avanish Kumar and brocade weavers will co-create with each other new artworks and designs. New interpretations and artworks will be created through a visual dialogue. The results of this artistic endeavor, the brocade weaving technique and the cross – cultural exchange will be unlocked in an exhibition and publication.

The brocade weaving centers of India developed in and around the capitals of kingdoms or holy cities because of the demand for expensive fabrics by the royal families and temples. Rich merchants of the trading ports or centers also contributed to the development of these fabrics. In India, during the Mughal period, around the 14th century, weaving of brocades with intricate designs using gold and silver threads became the specialty of Banaras. Consequently, Varanasi became one of the main centers for brocade weaving. Here the weavers were greatly influenced by the brocade weaving regions of eastern and southern Persia, Turkey, Central Asia and Afghanistan. The weavers from various backgrounds interchanged their skills, and this intermingling of creative techniques and ideas, brought about the most exquisite fusion designs. Until present day this exchange of cultures and its effect can be seen in Indian brocades. 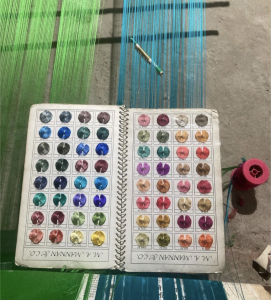 Traditionally the brocade weaving communities have been weaving saris, which are used for important festive occasions such as weddings. The art of the Indian brocade weavers is slowly disappearing. Also, we can see that increasingly look-alike Banarasi saris are flooding the market. These saris are mass-produced in China on massive looms and therefore retailed at very low prices.​

This artistic exploration is generously supported by Mondriaan Fonds and Dutch Embassy, India